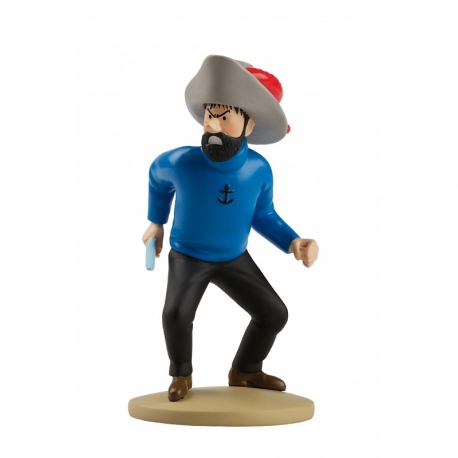 Since his appearance in The Crab with the Golden Claws in 1941, Captain Haddock has never ceased to surprise us with the multiple aspects of his personality. By turns generous, sensitive, angry, vengeful, brave, heroic, weak, depressed, here he is now theatrical, lyrical and as if possessed by his illustrious ancestor, the knight François de Hadoque. We find him here in a combat position, ready to fight with these forbidding men, in this case, his janitor and a locksmith. Presented in a position that says a lot about his ferocity in the engagement, Haddock transports us in a single image in a world of freebooters, privateers and gallows-birds. Tintin's friend is a real tough guy, which does not prevent him from being a real comedian, even with a sword in his hand.

Reference of the figurine : The Secret of the Unicorn, plate 13, box D3

First appearance : The Crab with the Golden Claws

Distinguishing feature : Wearing a pirate hat and wielding a navy sword with ferocity

Famous sentence : Off you go, pirates! At large!