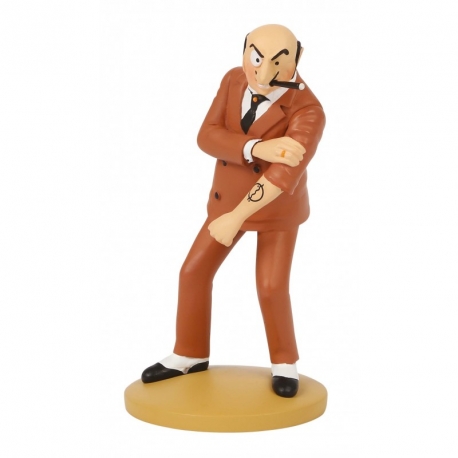 It is the one where Roberto Rastapopoulos lowers his cards, or rather raises his sleeve to show to Tintin his tattoo, the sign of the pharaoh Kih-Oskh, proof of his membership in the international gang of drug traffickers of which he is besides the supreme chief. Like any big boss who respects himself, his setting is impeccable, the monocle and the cigar adding the touch of refinement that he wishes to display.

But it's a waste of time, true class can't be bought and our man has made all the efforts of coquetry of the ground, it gives above all the aspect of a scoundrel a little vulgar. The smile, the big eyebrows in circumflex accent, Rastapopoulos displays a bad air; he holds Tintin at his mercy and and intends to let him know it. One can only be pleased with the choice made by the designers of the figurine, it is very revealing.of the figurine, it is very revealing of the character.

Reference of the figurine : The Blue Lotus, plate 57, box B3

First official appearance : The Cigars of the Pharaoh

Cult phrase : "You don't know who you're dealing with ! Distinguishing feature: bears a tattoo of the pharaoh Kih-Oskh