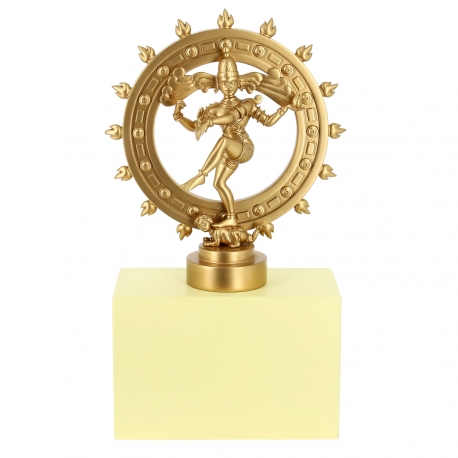 This beautiful figurine of Shiva, which is part of the collection of the "Musée Imaginaire", will fill you with joy. The Civa statue is accompanied by a numbered certificate of authenticity.
Who's Shiva ?
Shiva is wor - shipped in the abstract form of the Shiva Lin - ga, anthropologically he is usually depicted as a being immersed in deep meditation or, as we see in Cigars of the Pharaoh (p.50), manifest - ing as the cosmic dancer Nataraja dancing the dance of creation, preservation and dis - solution – the Tandava.SShiva means ‘auspicious one’ in Sanskrit. Two of the major traditions within the pantheon of Hinduism hold different per - spectives on Shiva: the Shaiva tradition con - siders Shiva as the Supreme God; the Smarta tradition conceives of Shiva as one of five primary forms of God.
The "Musée Imaginaire"
The characters and objects in this new series are taken from the poster Hergé created for the 1979 exhibition, Le Musée Imaginaire de Tintin. Each figurine comes in a special box with a certificate of authenticity.
“In June 1979 a major exhibition, which would later be hosted in other venues, was inaugurated at the Palais des Beaux Arts in Brussels. Hergé was not involved in the detail of the exhibition but the creators explained that the purpose was to put some of the objects that Tintin comes across in his adventures alongside the real objects that inspired them. On the poster he created for the exhibition Hergé drew his main characters in the middle of an imaginary display, the stuff of dreams for Tintin fans and collectors.” Taken from Chronologie d’une œuvre – volume 7.