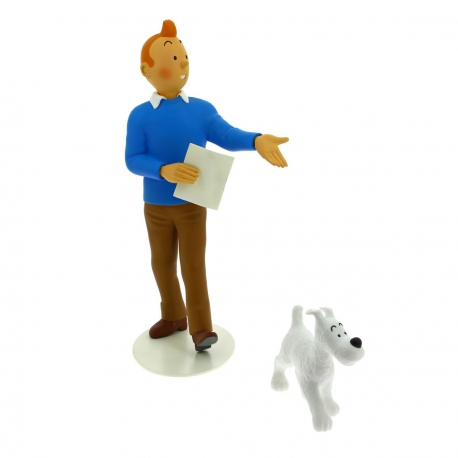 By buying this product you can collect up to 14 loyalty points. Your cart will total 14 points that can be converted into a voucher of 2,80€.

As 2016 draws to a close we are proud to offer our customers the central figurine – Tintin & Snowy – from a brand new series of collectible statuettes. Crafted in resin and lovingly hand-painted, this superb figurine shows Tintin guiding his friends around a Tintin fan's dream exhibition.

“In June 1979 a major exhibition, which would later be hosted in other venues, was inaugurated at the Palais des Beaux Arts in Brussels. Hergé was not involved in the detail of the exhibition but the creators explained that the purpose was to put some of the objects that Tintin comes across in his adventures alongside the real objects that inspired them. On the poster he created for the exhibition Hergé drew his main characters in the middle of an imaginary display, the stuff of dreams for Tintin fans and collectors.” Taken from Chronologie d’une œuvre – volume 7

17 other products in the same category: