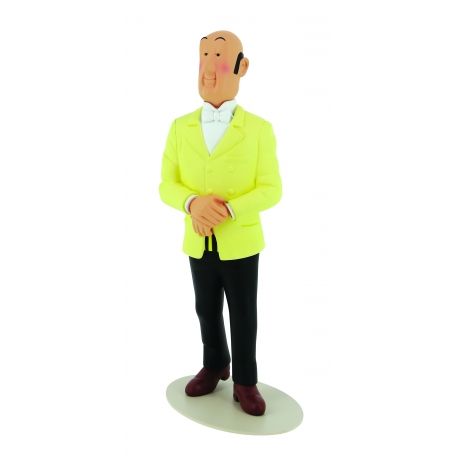 By buying this product you can collect up to 17 loyalty points. Your cart will total 17 points that can be converted into a voucher of 3,40€.

This magnificent figurine is a new adddition to The Imaginary Museum of Tintin collection. The famous Nestor, the butler at Marlinspike Hall.

The characters and objects of this collection are based on the original poster of the 1979 The Imaginary Museum of Tintin exhibition.

In June 1979, an important exhibition, created for touring, opened at the Palais des Beaux-Arts in Brussels. The detail of its contents escaped Hergé's attention, but its creators explained to him that it was a question of confronting the mythical objects collected by Tintin during his adventures with the real objects that inspired them. On the poster of the exhibition, Hergé tries to organise the foray of his main characters in to the middle of an imaginary installation that will drive all the collectors crazy with jealousy. “Extract from the original French edition, Chronology of a work - volume 7”.

Each figurine is packaged in a box, and is accompanied by a numbered certificate of authenticity.